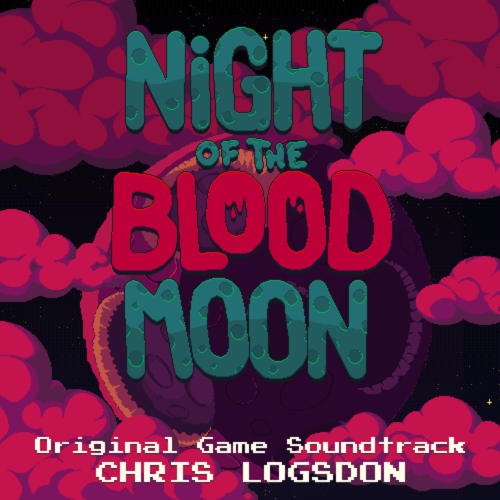 Awakened by the dark power of the blood moon, you become the nightmare that invades those familiar child-like dreams. Night of the Blood Moon is a fast-paced action rogue-like developed by Tyler McDermott, with music composed by Chris Logsdon.

Working entirely on his own, Tyler ran a successful Kickstarter in the summer of 2018, with the primary goal of funding a custom soundtrack. Chris caught wind of this and contacted Tyler. It was a great fit for his electronic-tinged style and penchant for darkness. He decided to hop into one of Tyler's development live streams, only to hear one of his own songs being played in the background! After chatting with Tyler, a friendship was quickly formed and Chris was officially brought on board.

The soundtrack is driving and electronic at its core, but pulls from a wide variety of genres, instruments, styles, and textures to match the unique personality of each level. The game explores many different themes, including mystical jungles, open oceans, winter wonderlands, and a castle in the sky. Each of these is painted a vivid musical soundscape, and topped with a distinct and memorable melody. The songs are designed to bring you on a quick-paced, action-packed journey that will have you humming the tune well after you’ve unleashed darkness on the dream world!

“This was a super fun soundtrack to work on! At first I actually thought it would be easy - just a bunch of beats to keep the action going. There was a lot more to it though, and it really pushed me to grow in ways I wasn’t expecting. We put a ton of thought into the instrument choices, melodies, pacing... everything. There was a lot of back-and-forth iteration that regularly devolved into us just sharing music we love with each other!

It’s been a wild ride, and I’m very thankful that Tyler wanted to work with me. I have a lot of respect for developers like him who work solo to make their passion projects come to life.

I hope you enjoy the unique charm of this game, and that you feel the passion put into every line of code and every note played!” ~ Chris Logsdon

Night of the Blood Moon (Original Game Soundtrack) was made possible by the following individuals: