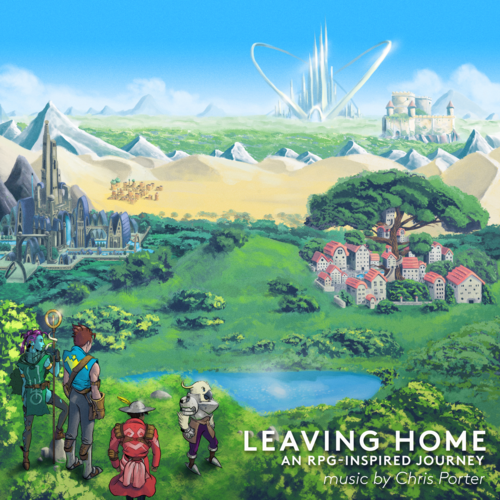 Follow a group of adventurers on this RPG-inspired journey as they leave their hometown to embark on a grand adventure towards the far-off horizon. Embark on a musical pilgrimage across vast steppes, sprawling silver plains, expansive deserts, and perilous mountain passes. Visit small forest hamlets; explore the commoner's square and fountain district of a great, towering city; advance eastward and experience the grand bazaar of a city in the sand, enter the ruins of an ancient castle, and finally arrive at the magnificent gleaming capital. A grand adventure awaits!

The music of RPGs has always been a huge source of joy for me, and much of the music I've composed has been inspired by it. For this album, I took a look at all of the RPG-inspired music that I had written over the past several years and discovered that I had been subconsciously weaving a grand adventure of my own. After deciding on the track order, I contacted my good friend, the amazing artist Jonathan Griffith, and had him create the stunning cover art for the album. I wanted the listener to be able to gaze at the album art as they listened and follow along on the journey from place to place. I'm thrilled to release this album and I'm so grateful for everyone who decides to go on this musical adventure with me.

Leaving Home: An RPG-Inspired Journey was made possible by the following individuals: