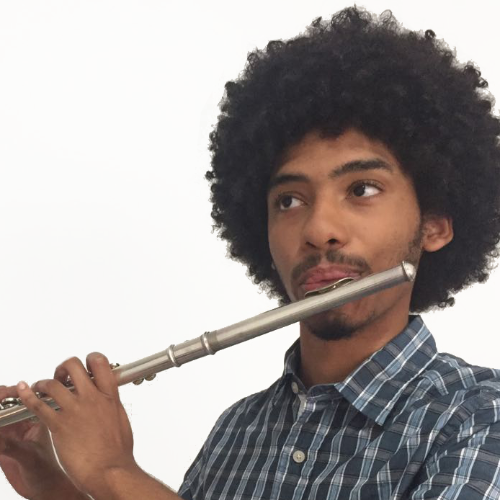 Born in São Paulo's coast, Josué learned with his parents to have an appreciation both for music and for video games from a very young age. Although he definitely enjoyed music and video games as pastimes during his childhood, he never took either of them seriously. However, everything changed at the age of eleven. Through the power of the internet, he found out about Greg Pattillo, indie games, Castlevania! He learned the history of vide games! He fell in love with chiptunes! It was clear to him that he was destined to become a renowned flutist and a game developer. Fast forward five years and you'll find he's still far from making it as a game developer. In the musical front, on the other hand, he had a little more luck: through playing video game music on his YouTube channel, he somehow found his way into a gigantic group of fantastic musicians, including many of the artists who made he fall in love with video game music in the first place. As part of the online video game music scene, Josué hopes to make his love for chiptunes, progressive rock and jazz shine through every contribution he gives to the collective's albums, while also making friends in the process.

Flute on Your Best Nightmare

Flute on Swung Down

Flute on The Faithful and the Brave

Flute on Under The Stars

Flute on A Contest of Aeons

Arranger on A Measure of Fayth

Producer on A Measure of Fayth

Mixing Engineer on A Measure of Fayth

Bass on A Measure of Fayth

Flute on Illusion (Is This A Dream)

Flute on Hopes and Dreams (from “Undertale”)

Flute on Apotheosis (from “Journey”)

Flute on Valley of Winds

Flute on Canção do Vento

Flute on Assault of the Silver Dragons

Flute on Sword of Fury