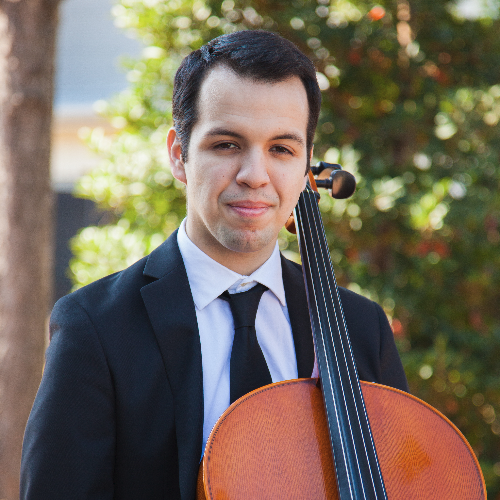 A native Houstonian, cellist Andrew Cavazos has performed in Italy, China, Puerto Rico and across the United States. Andrew has appeared as a soloist with the Houston Heights Orchestra and the Conroe Symphony Orchestra, has performed on KUHF's "The Front Row," and formerly served as the principal cellist of the Houston Heights Orchestra. He has appeared as a guest artist at the University of St. Thomas and Houston Baptist University. Mr. Cavazos is currently pursuing a master's degree in cello performance at the University of Houston, where he studies with Anthony Kitai of the Houston Symphony, and he is a graduate of Sam Houston State University, where he studied with Daniel Saenz. He has performed in master classes given by Mischa Maisky, Alexander Rudin, Mike Block, Carter Enyeart, Darol Anger, and Antonello Farulli. He is also on the faculty at the University of St. Thomas Music Preparatory School, where he formed the UST MPS Cello Choir, and taught as part of the Houston Youth Symphony Coda Program, the Conroe Symphony Youth Orchestra in Conroe, Texas, and the Huntsville Youth Orchestra in Huntsville, Texas. He maintains private studios in Houston and in Katy.

cello on Valse for the Moon